Here comes some pictures of the finished dismounted Nyland Dragoons I been working on for my Finnish War 1808-1809 project. Their mounted counterparts are also in progress...

sorry for my absence, summer vaccation in Darlecarlia and no proper internet access, posting this through the phone... I have some old pictures from my Finnish War 1808-1809 with the build of a Squadron of 7 dissmounted Nyland Dragoons. There will be 7 mounted to, but as this project still are on Hold they Will have to wait...

Here comes some WIP pictures from the Build and of the 7 Dragoons before you get the painted ones...

The minis I used was the Perry British Riflemen, with Arms/Rifles/Sabres from the Perry Dissmounted French Dragoons. The fethers was from a bunch of French Hussar heads my friend Tony fixed.

As they was wore short hussar coats I had to do some cuting... To the left you have before and to the right after...

Ammo bags are from Victrix Austrians kindly furniched by Burkhard.

Now there are just some painting to do...

Some pictures of how they should look like, please excuse my shortcuts in some of the converssions... 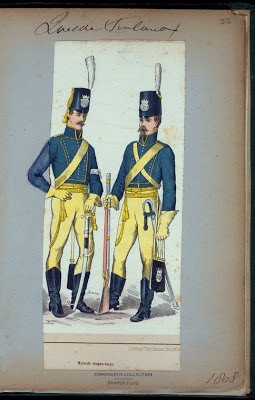 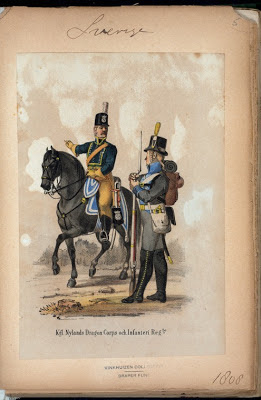 Just an easy start for my summer project, during the last week I just have painted the two mounted Men-at Arms to complete the Bybelsbak unit. As all mounted units in Lion Rampant there are 6 minis.

I depict the main character of this unit as the Danish Knight Erik Bydelsbak that was born around 1330 and would have been 31 years old as the Danes invaded Gotland in 1361. If he was in the Danish invasion force he did survive the enterprise as he it told to have died in 1410.

In Lion Rampant a group of Men-at-Arms will cost you 6 of your Points and as you only got 24 points to spend on your Hoast they are a real investment...

...but if you are seeking for something to really beat up your opponents units the Men-at Arms are for you, but be aware that they also are lose cannons as if a enemy unit get within their charge range you have to roll to see if they makes a involuntary charge, and if they don´t you may not move them at all during that turn...

Read more about the Lion Rampant rules at the authour Dan Merseys blog.

With the soon, september 2014, release of Dan Merseys medieval rules Lion Rampant I thought that my Summer project have to be to complete a new medieval army based on the armylist in the rules.

I was lucky enought to get invited by Dan to participate in the playtesting of the rules from the beginning in 2012, back then I was tryingout his not released medieval rules Scottorum Malleus, when he contacted me and asked if I wanted to try out his new big-skirmish medieval Rules that would be published by Osprey, and who am I to say no to that... 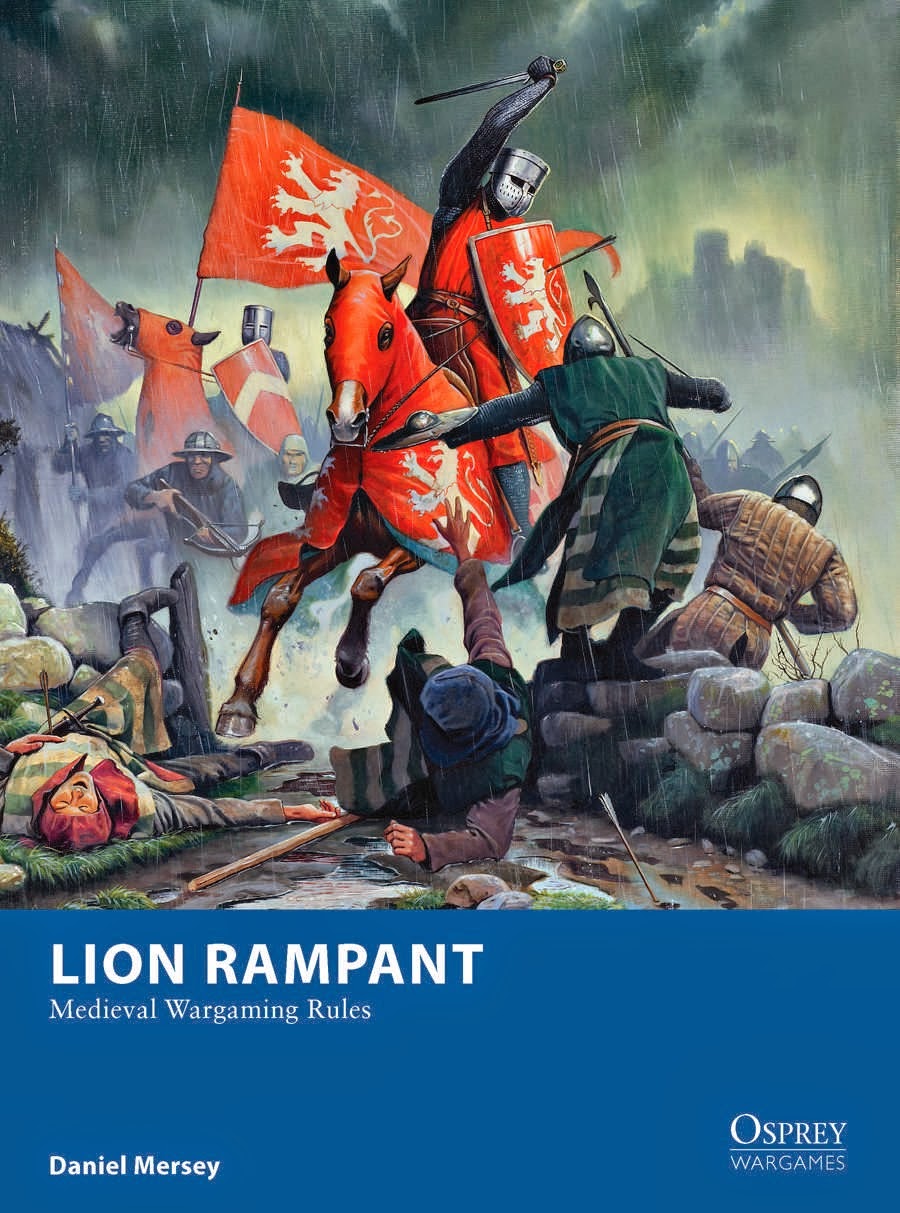 So during the last 2 years I have been giving feed back and run several test games of the Lion Rampant rules, I even had the chanse to see my contributions go in to the final draft and print of the rules :) Of course you can find my Lion Rampant AAR´s here at my blog.

Back to the Danish Hoast project, this force I´m painting for my UK based friend Tony, I have been working on it for some time but never got around to finish it so I thought it was time to make some progres and in the same time get some teasers out for the up-commning release of Lion Rampant and I hope the Hoast are finished in time to the rules are released in September 2014.

It will be a Danish Hoast that should be set in time from the Battle of Visby 1361 to the Battle of Åsle 1389 and maybe some erlier and later to, but in short the time of the King Valdemar IV of Denmark and his Daughter Queen Margaret I of Denmark. The minis are a mix of Perry and Claymore.

A basic Lion Rampant Hoast are made up of 24 points, my ideea by the way:), For this hoast I have chosen the following units:
In total 12 mounted and 36 foot minis. (Only two Fire Forge boxes...any one... )

Sorry for the of focus picture, but here are The Leader with his Riddare and Svenner (Knights and Squires) from the House of Thott, Just the Leader painted so far, but the rest will have the same colour scheme in red and yellow. 5 minis left to paint

Riddare and Svenner from the House of Bybelsbak. The Danes made good use of German mercenary Man-at-Arms to in their armies. This will be the first unit I will do as there are only 2 minis left to paint, got to have a easy start:)

In Lion Rampant all mounted units are made up of 6 minis.

Danish Archers hired by the House of Grubendal and have their CoA. I would probably had mixed in some crossbow men in the unit to, if I had the minis, as I belive they didn´t field the shooters in different units. 6 minis left to paint.

Obudshaer was trained Danish and German foot troops set up for service abroad, they were well armoured and armed with Bills, Spears and other nasty tools of their trade. This unit will be hired by the House of Grubendal and have their CoA. 6 minis left to paint.

One more unit of Obudshaer this time hired by the House of Thott. 5 minis left to paint.

In Lion Rampant all mounted units are made up of 12 minis, if not Skirmishers as they are only 6 men in a unit.

If you want to read more of what to expect from the Lion Rampant rules please take a look at Dan Merseys blog there he have made several good and interesting blog posts about the rules and how they work.

One of the clerest memorys I have from the old RPG Mutant, that I played alot back in the days, are the dreeded Gigantic Stag Beetle, so I feelt that I needed one to set on the heroes in my new Post-Apocalyptic project...