At last have I completed 2 of the flags for my Medieval Swedish Impetus Army. The first flags to get painted was the Saint George Banner and a Banner for the Bishop of Linkoping in 1463.

Still no pictures of my painting progress...or lack of progress... I´m still working on the regiment of Highlanders for my AWI project...

Just have to share some pictures of some stunning work from our club forum of Led-unges swedish troops for the Battle at Neva 1240. Yes thas the man that painted Birger jarl some time agoe, you can see that picture here: 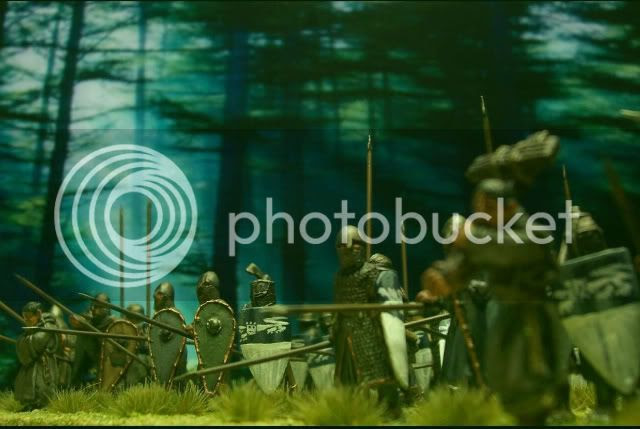 Minis from Assault Group, 24 minis on 8 Bases with 60mm front and with and painted flags.

Please make a visit to hi´s auction there you can find more pictures of these stuning units:)

Yesterday I was to my local gaming store...I could not resist to buy me a new board game...I realy wanted to have it for some time...

Manoeuvre by GMT Games. Its a easy boardgame set i the napoleonic era. I´m not a real fan of napoleonics but I realy like the easy rules and the format of the game. I can set it up on my kitchen table and still have room over for beer and snacks and its possible to finish a game in an houre or so.

In the box you get all the stuf you need to get started, and if you get some extra dice and fix some extra redoupt markers you can play up to 8 players at the same time only using one box...

I have only had the chanse to play some test games last night but I already like it very much:)

There are eight countries represented: France, Britian, Russia, Spain, Austria, Turkey, Prussia and the US. Each country has 8 units and a deck of cards(60) specific to the country.

Two ways to win: Kill off five of your opponents units, or control more territory on your opponent's side of the map if both players go through their decks.

Each turn you can move one unit, one square for infantry, two for cavalry. You don't need cards to move, but you do need them if you wish to attack. Each unit has several cards in the deck that will let you attack with that unit. Combat is simple:

1. You play a card to activate an attacking unit
2. The defender plays any cards that might help him. The unit cards can also be used to add to defense, leaders and Withdraw cards are good.
3. The attacker can now play any additional cards. If you want two or more units to combine on an attack you'll need a leader, other special cards help here too.
4. Basically it's the attacker's unit strength plus whatever die roll the card played offers vs. the defenders strength. Weak units roll a 2d6, good units might roll d10s. There are terrain mods and other things to add - it's simple.

Certain unit cards will let you Bombard or Volley fire, you roll the die and hope you get lucky. No harm if you miss.

After the battle you can try to restore a unit that took a step loss. There are several cards that will do that; there's also a Guerilla card that will stop your opponent from resupplying.

That's a rough sketch of how a turn works.

The designer did some homework when it comes to each country's units and cards. Spanish cavalry is lousy. Russian units don't start off too strong, but if they take a step loss there is little drop off in effectiveness. The Prussian and French decks have good leaders. Austria and Spain have several Guerilla cards in their deck used to cut resupply attempts. The Americans aren't that great, but they've got Ambush cards which you can use to knock off units that have taken a step loss, even if they've retreated from the front line. And so on.

Yes I have painted some...15mm Crimean War minis for my friend Oskars Crimeas War games that we are planing to play on the 9th of april.

And I have alsoe painted a little bit on my next regiment for my AWI project the 42nd Highlanders...I hope they will be finished by next week...

I alsoe working on some more flags for my 15th centery Swedish rebel army...today I have a VIP pictures of the banner for the Bishop of Linköping Kettil Karlsson Vasa (First Name/Last Name(son of Karl)/House Name).

Kettil was the nobleman that started the rebellion in 1463 against the Union/Danish king Christian I of Denmark. The King had imprisoned the Archbishop of Sweden Jöns Bengtsson Oxenstierna that was a relative to Kettil. It is stated that Kettil placed he´s Bishop dress on the altar of the Cathedral of Linköping and dressed in armour and swore not to act as Bishop again until he´s friend and relative was released.

The rebellion led to the Battle of Haraker 17 april 1464 there the Swedish rebell army triumphed agains King Christian I´s Union/Danish army...the battle that I aiming for with my armies:)

...and now the picture of the banner...I don´t know if it looked like this but I have combined the arms of the Bishop of Linköping and the older arms of the House of Vasa...

Haven´t had much time for painting the last couple of weeks, but I managed to work a little bit on a Main Banner for my Swedish 15th centery army for Impetus.

I dont realy want to use the Swedish flag for them as it probably wasen´t used back in the 15th centery...But according to some historical sources the Swedish army did fight under the banner of several saints during the attack on Denmark in januari 1452. There are 4 different mentioned, the banner of Saint George, Saint Erik, Saint Olof and a banner with the Blessed Virgin Mary with the 3 Swedish crowns alsoe on it...

So I will try to make me some Banner for the Saints with a Swedish look:)

Here are a first VIP picture of the Banner of Saint George, more work to do...

I have just pre-ordered the Hail Ceasar rulebook from Warlord Games. Looking forward to these rules as I realy lke the Black Powder rules.

I and my friend Oskar made a atempt to use the Black Powder rules for our Battle of Varna game, you can read the AAR here.

Last monday at our club meeting we had the opportunety to try out Oskars last painting frenzy the Russian Post-Apocalyptic Zombie Project.

He have the last month or so painted 64 Plastic Zombies from Mantic Games and 32 Survivors, minis mostly from Lead Adventure Miniatures. The buildings are plastic russian houses from Pegasus Hobbies.

First some pictures of the gaming board.

Set up of the game, the 11 players was divided in 3 different groups with different missions... and about 36 Zombies at the start of the game...

The 5 members of the Military group that was assigned the task of geting fresh wather from the wather tower and to protect Survivors and Civilians from Gangers... You can alsoe see one of the character cards that I made for the game, small foto of the mini and all the gaming stats you need.

The 3 Survivors with mission to find a lost group member in one of the buildings...they started surounded with Zombies...

The 3 Gangers that was searching the buildings for food become them self food for the Zombies...they got overrun by a Zombie hoard at once...2 of them got slain but the third got away then the Zombies started to feast on he´s comrades... The 2 unlucky player got to respawn with 2 new Gangers:)

The Military make a swift advance not meeting to much recistance...

The Survivors started to search the buildings with a Zombie hord in close company...

One of the New Gangers sneaking behind a old car...trying to start it, but it was out of gas... The noice from the startengine draw the attention from some Zombies...

The Survivors got some reinforcements during the game...they soon got in conflict with the Gangers that tryed to kidnapp the missing member from the Survivorgroup...

The Military runs in to some problem... Even as the Military got orders to protect Survivors and Civilians from the Gangers they didn´t even bother then they could see and hear how the Gangers attacked the Survivors...

A Ganger tryes to get in to a house with hiding Civilians...

It was a quite nice game, the rules worked realy god with lots of unexpected events...BUT 11 players was some to many...to much waiting time...

Today at out club meeting my friend Oskar are going to let us try out he´s new Russian Post-Apocalyptic Zombie Project. I hope to have a AAR from the game later this week...Here are some VIP pictures of the terrain... 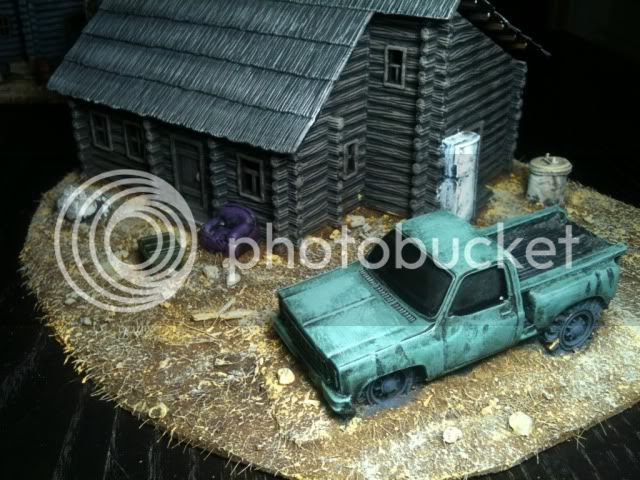 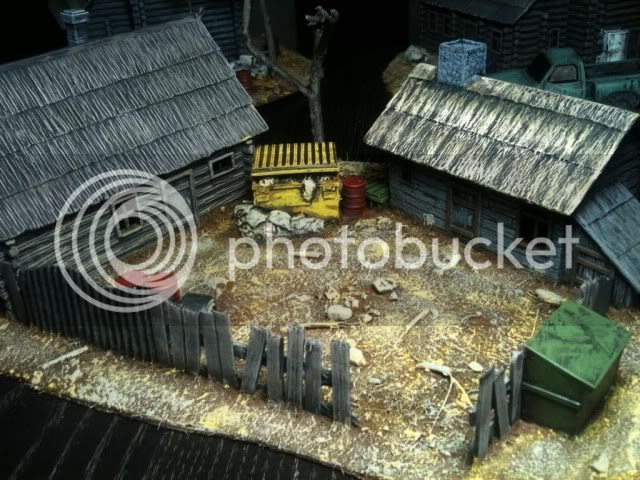 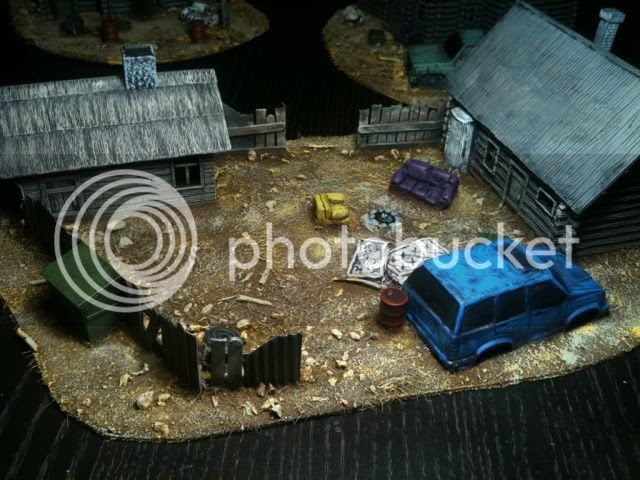 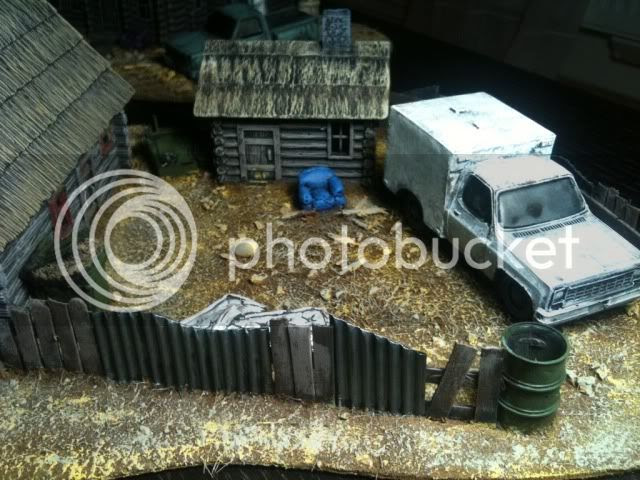 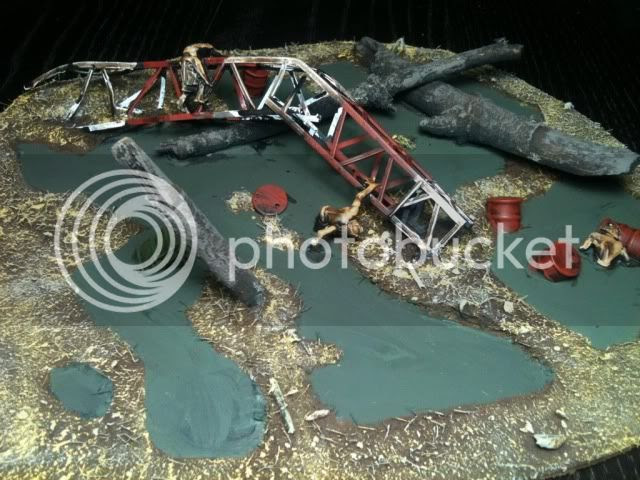 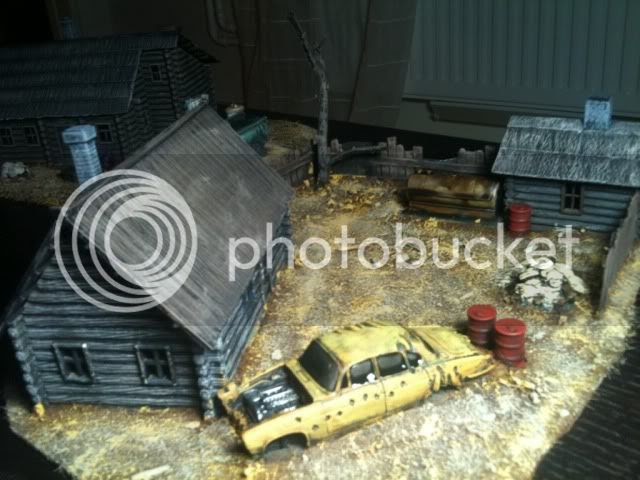 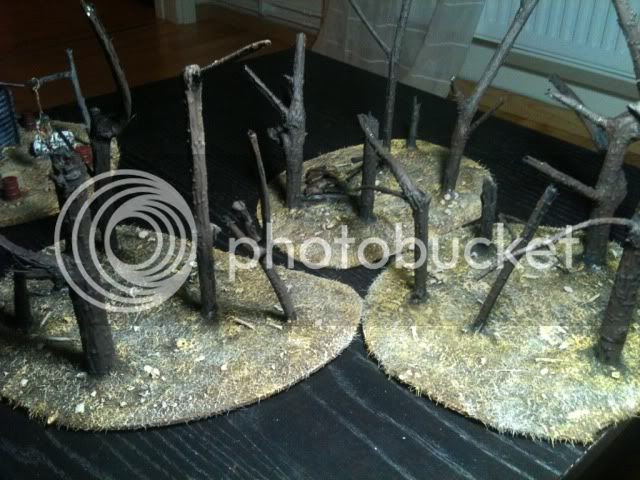 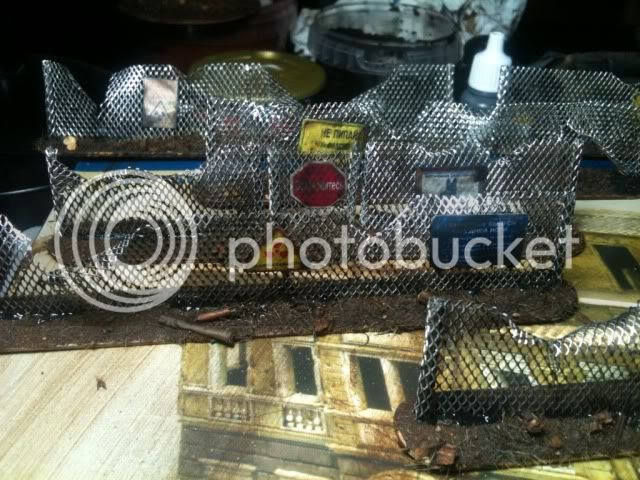 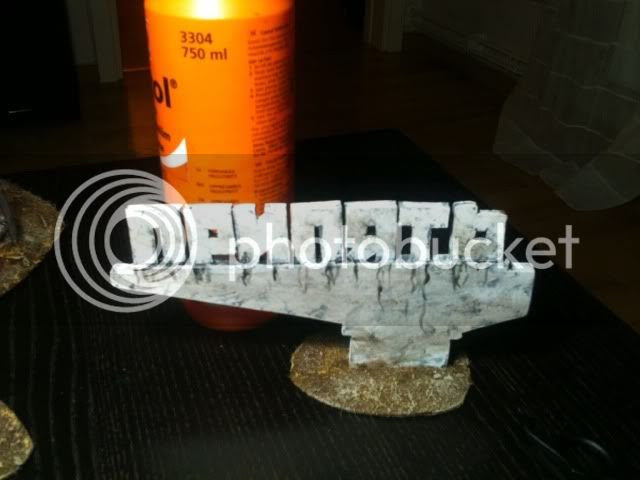 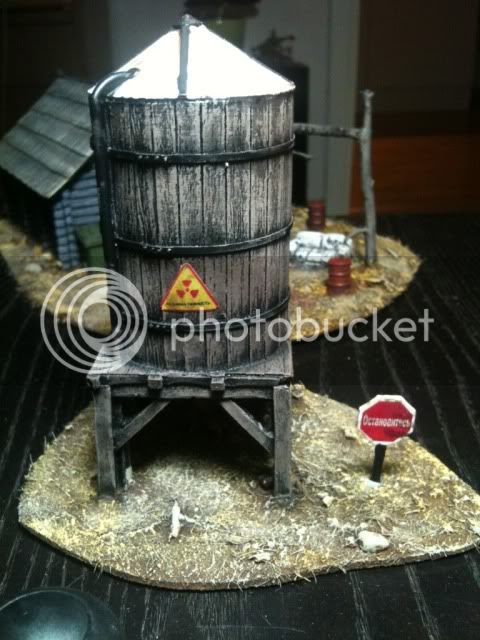 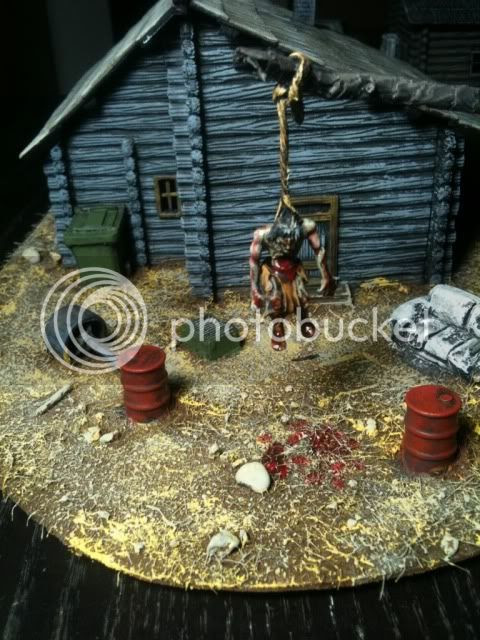 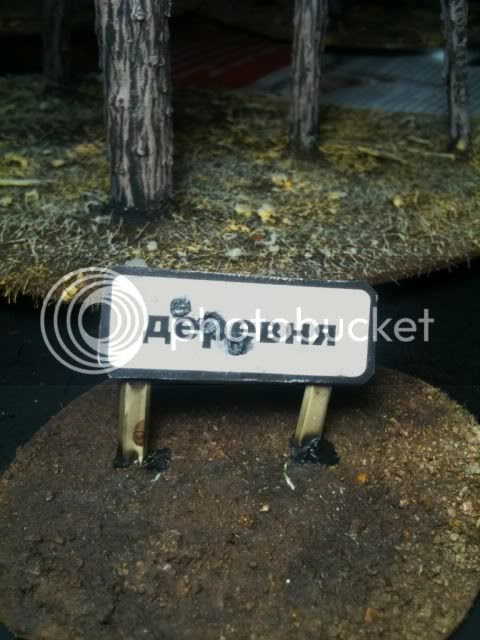 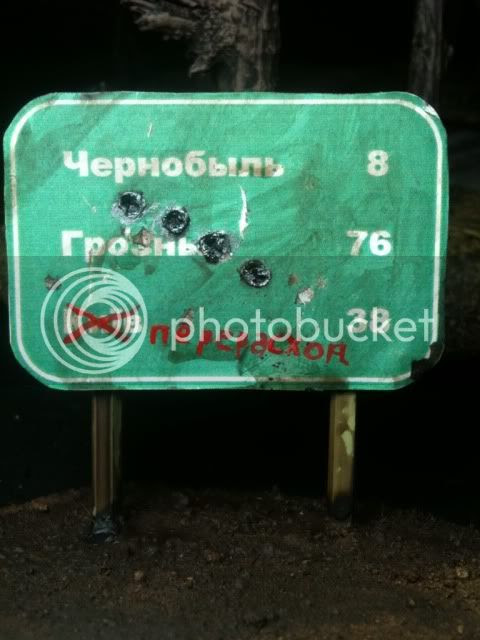 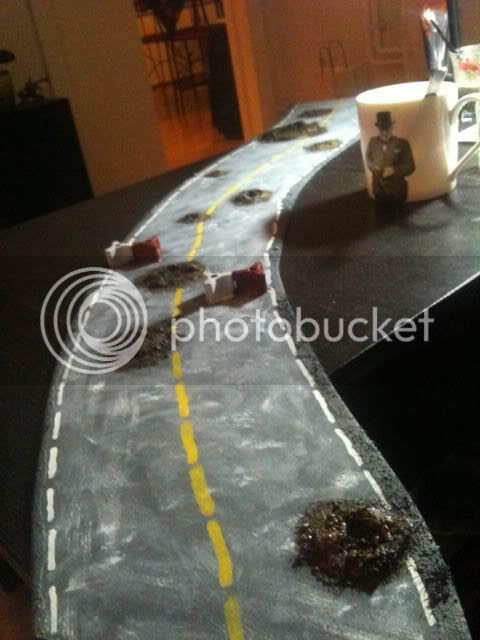