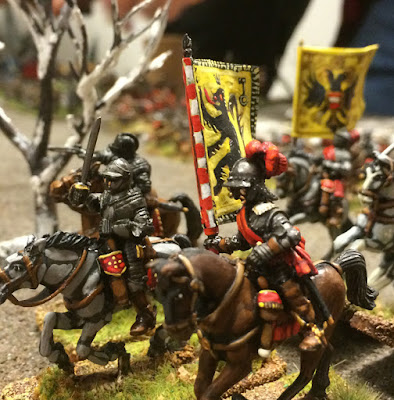 The Campaign revolves around the war between the Swedes and the Poles in 1625-1629 and we have started of during the autum of 1625.

In 1621, the Swedes besiege and conquered Riga, which attracted attention, as it was the first time a Protestant leaders defeated a Catholic power. The Swedish army was worn and the Poles could regain the initiative at Dorpat. Truce was signed in November 1622 and was extended until March 1625. Any acceptable terms for peace with Poland, could not be reached, so Gustav II Adolf planned a new campaign against Poland, which began in June 1625. Kokenhusen, Birze and Mitau was captured and Dorpat was taken after six days of siege. During the autumn of 1625 two Polish armies appeared against the Swedish forces and Gustav II Adolf decided to get into a clash before the Polish forces managed to unite.

So this is the starting point for my Polish War club campaign.

Below are a map of the area around the Town of Kockenhus where the campaign are set during the Autum of 1625. The Red and blue sabers mark the point of each game and the winner...

The Swedes are in a roll at the moment as they won the 8th game and also the 9th that was inspired by the Battle of Wallhof in January 1626.

You can see my pictures below and read a full AAR at my matey Ulf´s blog.

I´ll give it a new try and post my American Civil War - ACW - Philadelphia Brigade for Sale at ebay, Starting bid are £1 + registered P&P worldwide of £30.

Hven´t been much painting lately but I have at least managed to paint the last minis from the Gripping Bests plastic medieval Arab Spearmen and Archers box that I use to build me a 19th century Zanzibar Slaver force. Pictures below show the 12 Ruga-Ruga Bandits/Mercenaries.

In The Men Who Would Be Kings rules I probably will run them as Poorly Armed Irregular Infantry with Sharpshooters and Field Craft @ 5 points.

Poorly Armed but with Sharpshoter as they most often used Antiqued Muskets loade with stones, metal scrap, marbells etc, more like a short ranged shootgun, i.e increased Firing Value due to the Sharpshooter option.

Email ThisBlogThis!Share to TwitterShare to FacebookShare to Pinterest
Etiketter: 28mm, Colonial, Gripping Beast, Osprey, The Men Who Would Be Kings 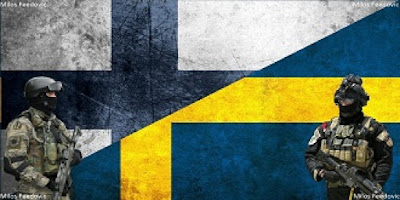 Our gaming club Little Wars was visited by three members, Teemu, Marco and Ludde from the Finnish Wargaming club Nopat & Taktiikka based in Helsinki. 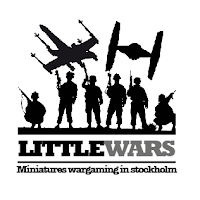 During the saturday we had a good day of gaming with the theme Finlans/Sweden vs Russia...

Three games was played, first a Finnish War 1808 game there I introduced them to The Pikeman´s Lament rules that will be published by Osprey in January 2017.

Napoleonic war are a bit out of scoop for the rules as we state that they cover the period to the end of the Greate Northern War 1721, BUT as the rules are so easy to adapt I set up a napolionic game using them.

Here follows some pictures from the first game that ended in a draw as both sides managed to fulfil one of their two objectives.

The Swedes managed to defend the bridge but not stop the Russian Infantry to cross the stream. It was a good game and they seemed to like the rules:)  Teemu was even so inspired by my 1808 project that he started one at once as he arrived back in Helsinki, you can see his progress on his blog.

Russians to the left and Swedes to the right

Never leave you cavalry standing in front of a artillery gun...


The second game was a Greate Northern War game using the Black Poweer rules as I was inwolved in the gaming I didn´t remember to take any pictures but you can see a good bunch of them at Teemu´s blog. The game ended in an Swedish Victory !!! :)

The third game for the day was once more a Greate Northern War game there I wanted to show that The Pikeman´s Lament work fine with multi-based minis and also get an possibility to test Pikes, as after all this is a period that the Pikeman´s Lament cover:)

In the pictures each unit are 2 bases with 5 or 6 minis, one base are removed when at half strenght. The units with the Officers have a Officer mini attached. In the first picture below you can closest see one Swedish Pike unit with Officer and then a Shot unit.

The game was an utter Swedish Victory !!! :)

On Sunday we visited the Army museum, once again pictures at Teemu´s blog :) We also hade a quick game of Waterloo 1815 produced by some fellow Finns running the company Up-games.

Waterloo 1815 was a really nice little game, plying out the Battle at Waterloo 1815 in 15-20 minutes. I was striked by the very high production value of the game.

In short a greate weekend gaming with our dear Finnish friends, now we just have ti increase the minitary cooperation further by a trip by us to Helsinki for more wargaming. 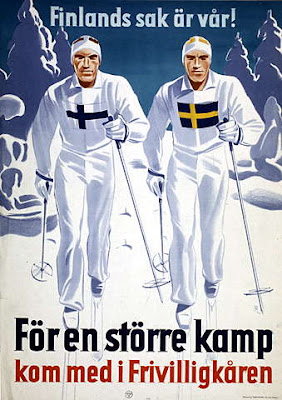 Swedish propaganda poster from 1940. Appeals to the swedish people to join and aid its eastern neighbor against the Soviet threat. A total of 8000 Swedes participated in the Winter War 1939-40. Artist: Fritz Rückert