Flipthrough of The Pikemans Lament 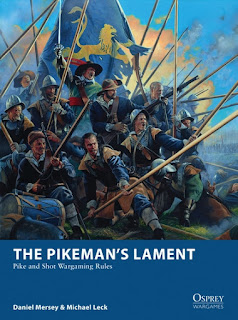 Wargames Illustrated have done a "Flipthrough of The Pikemans Lament" video, you can see it below. Just 2 month left to release. North Star have also started to take Pre-orders.

Email ThisBlogThis!Share to TwitterShare to FacebookShare to Pinterest
Etiketter: The Pikeman´s Lament

As you might remember I got me a few of the new Fire Forge Plastic Russian Infantry as well as some of their Resine casts that I havent got around doing anything with yet...

I havent had any inspiration for painting or building minis the last month or so, it was a long time ago I didnt paint for a whole month...

So I thought that I had to build me some more Medieval Russians for my Baltic Crusade project to get me back on track again...

About the Plastic Russian Infantry, I really like them, they are perfect to mix up with the Gripping Beast Vikings to get Eastern looking Vikings. 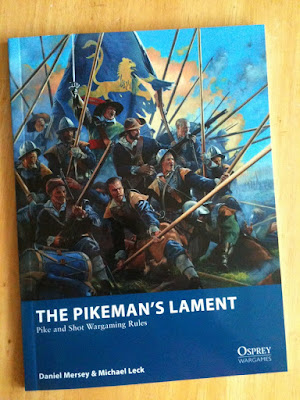 After almost two years of waiting and work I got a advance copy of The Pikemans Lament in the post today, such a greate fealing to see onces first wargaiming rules IRL.

I hope you all will like how I and Dan Mersey have reworked the Lion rampant rules in to Pike and Shot wargaming rules. The official release date are late January 2017 so i´m not sure that Santa can bring you a copy ;)

Anyway pleased with the book and I hope you will be that to. If you want to pre order a copy you can do so at the Osprey site. 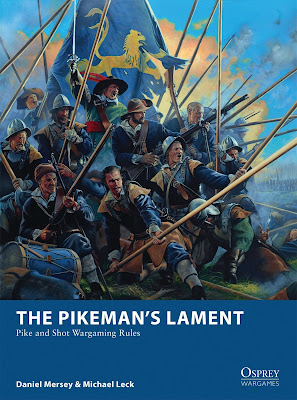 Recreate the action and drama of 17th Century warfare on your tabletop with The Pikeman's Lament. Start by creating your Officer - is he a natural leader raised from the ranks, the youngest son of a noble family, or an old veteran who has seen too many battles? As you campaign, your Officer will win honour and gain promotion, acquiring traits that may help lead his men to victory. Before each skirmish, your Officer must raise his Company from a wide range of unit options - should he lean towards hard-hitting heavy cavalry or favour solid, defensively minded infantry? Companies are typically formed from 6-8 units, each made up of either 6 or 12 figures, and quick, decisive, and dramatic games are the order of the day. With core mechanics based on Daniel Mersey's popular Lion Rampant rules, The Pikeman's Lament captures the military flavour of the 17th Century, and allows you to recreate skirmishes and raids from conflicts such as the Thirty Years' War, the English Civil Wars, and the Great Northern War.

Email ThisBlogThis!Share to TwitterShare to FacebookShare to Pinterest
Etiketter: The Pikeman´s Lament 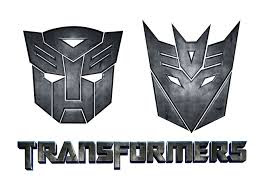 During the weekend my son David started to build a city and play with his toy Transformers that he got from MacDonalds I think, after a while he asked for to play a game with them and who was I to say no:)

As he is familiar with the Dan Merseys Rampant system we used Dragon rampant as a bas for our Transformers Rampant to fight out a battle between the heroic Autobots and the villainous Decepticons.

All Transformers was single miniature units and to not have to keep track of how many Strength Points they had lost we decided thayt all of them had just 1 but introduced "Recovery" , so in the turn after a Transformer had been taken out he rolled an activation for "Recover" and if succeeded the Transformer was up again and could activate as usual. We also removed the Courage value as we didn´t feel they would flee, but fight untill destroyed.

We used 3 stats lines for the different Transformers, both Autobots and Decepticons used the same. I dont know to much about Transformers so any experts might have to have indulgence with my rules;)

Wild Charge: If the unit is within Attack range of an enemy unit, you must test
to activate an Attack; this is the only order the unit can be given. Wild Charge
may not be used if the unit is Battered.

Fleet Footed: This unit does not halve its movement in rough terrain.

OOB for our game

Decepticons moving in to town, the Prime to the left, the two green ones are Tertium and the last two are Secundus Transformers.

Our little town center, the three Autobots, Optimus Prime, Green Prime and the Secundus Bumblebee, are hiding on the other side of town

The Decepticons are moving in to town...

Optimus Prime jump up on a skyscraper roof and open fire at the approcing decepticans...

One of the Desepticaons Secundus go down...

Green prime joins Optimus Prine om the roof top, the building start to scatter due to their weight...

Bumblebee also want to join in for the fight and advance in the center of the town...

Decepticaons Prime are flying ower the town searcing for his prey...

...landing on the roof top opposit to Bumblebee...

...Bumble bee charge the Decepticon Prime thinking he can outfight him...

The town are in chaos as the Transformers create hawock, building start to tumble down on people, cars and transformers...

The duilding Bumblebee and the Decepticon prime are fighting on starts to fall donw due to the heavy fighting, they both manage to rais up again from the crached building...

Bumblebee find him self in a problematic situation when one of the frenzied Deceptican Tertium attack him...

BOOOM... both Bumblebee and Deceptican prime was thrown to the ground... none of them continue to move...

With the Deceptican Prime out of the game the Autobots had the uperhand...

But the  Deceptican Secundus started toteardown building in a atempt to get the Autobot Primes  damaged...

...but they quickley was up on their feet agaon starting to fight the Decepticans...

Optimus Prime took a bad hit before Green prime could defeat the enemy...

We had a greate game even if my Decpticans lost. It´s nice to get some easy gaming with the sons toys using the Dragon Rampant rules :)

CONGO - Adventures in the Heart of Africa 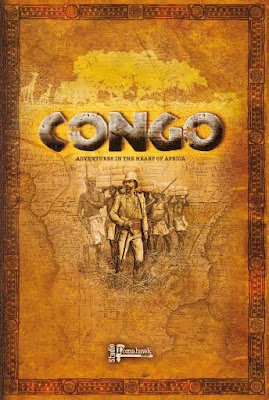 CONGO from Studio Tomahawk are probably the best looking wargaming rules I ever got my hands on, at least top 3 with Donnybrook and ...?

Anyway I must really say that Fred Machu have made a greate work with the layout of the CONGO rulebook that are the latest wargaming rules from Studio Tomahawk (SAGA, Musket and Tomahawk, Jugula). 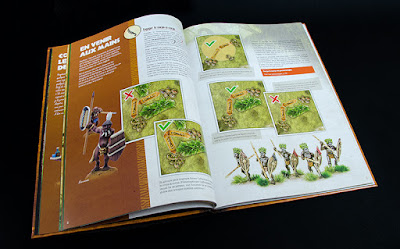 It is a set of skirmish rules set in the Darkest Africa as imagined by newspapers at the end of the 19th century. You play one of 4 diferent fractions The White Men Expeditions, The Sultanate of Zanzibar, The Forest Tribes or The African Kingdoms, each of them allows you to bring different warriors and characters for your African adventure. Each of the fractions would need about 25-35 minis, depending a bit on wheter you bring expensive elit warriors or more cheap ones. The gaming are are needed are quite small about 120x90cm would be enought.

The rules in them selvs are easy to understand and quick to learn and gives a good and interesting flow to the games much due to the activation cards that can limit you ideeas but also give you a puch in the right direction at a crucial time. The rules uses D6, D8 and D10 dice to describe the miniatures abilitys, the higher the better. 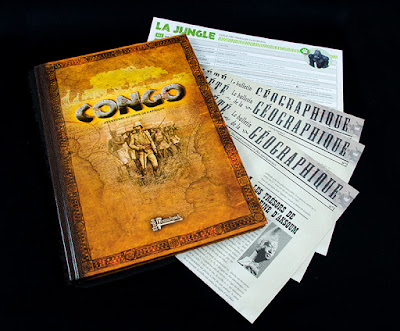 What I really like is that they managed to get a "mental" view to the combat to by making it possible to influence the minds of your enemies. They might be so scared that they performe lousy in the following combat or maybe even has run their way, leaving your White man explorer all by himselvs surounded by jungle cannibals.

What I dont like about the rules are all the markers needed and that ruin the good look of the gaming table... suppouse I can cope with that, but still a bit annoying.

The 8 Scenarios are presented in a stunning way, in the form of a 1870´s Newspaper "Le Bulletin de la Société Géographique", very inovative and gives a good feel for the era. 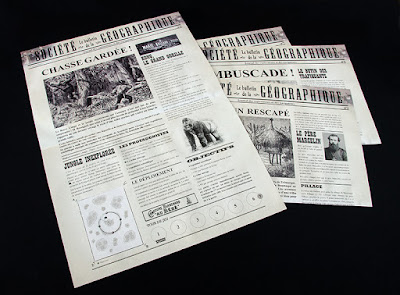 They also managed to keep out of the dubious exploitation of Congo by King Leopold of Belgium as they have placed the settings a decade before King Leopold hired H.M. Stanley to conquer the Congo Basin for his to be Congo Freestate. 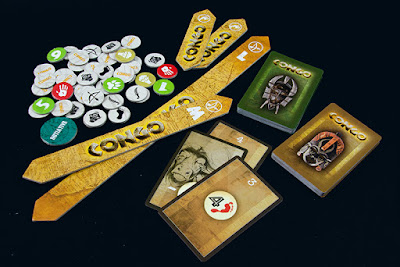 The CONGO Rulebook are hardcover, full color and 108 pages. You also get a deck of 44 cards for activations and a Punch out sheet of tokens and measuring sticks needed for the game. Ofcourse also 4 double sided "The Bulletin" sheets (8 Adventures for the game) and a Double sided Dangerous Terrain sheet. The Rules cost £34 wich feels a bit costy in my mind, but you get plenty for your hard earned cach, and you won´t need that many minis to get started.

Dice (D6, D8 and D10) and Miniatures are not included but both Wargames Foundry and North Star Miniatures have Box Miniature Sets for each faction in the game.

If you got the funds for it and like darkest Africa gaming I would defently recomentd the CONGO rules as they give interesting and fun games and best of all the production value and layout of the rules, very inspirational indeed !

As you might already know I have in Wargaming, Soldiers and Strategy Issue-86 two the articles "The Finnish War of 1808 - The boy versus the bear" and also "History and rules for Sharp Practice - The Swedish Army, 1805-09". The first one are background and Scenarios revolving around a Young Swedish Artillery officer that died a heroic death. The second one are a background and armylist for Too Fat Lardies Sharp Practise rules that have worked wery well in our games. 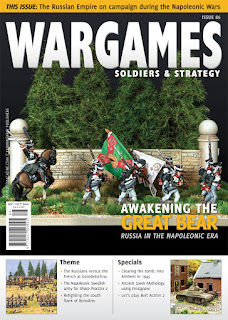 I thought I should post a bunch of pictures, that wasn´t used in the Articles, from our playtest of the different Scenarios. Wont give you a propper AAR but hope to inspire to some Finnish War gaming and an crave for reading my articles, if you haven´t already.

Bunch of extra pictures of the Swedes