Now I have sorted the minis in Tercios and I will start to paint them up...

As I have Vietnam war minis in both 10mm and 20mm I have decided to sell of my 10mm, minis and terrain at e-bay.

Please make a visit to my auction

Terrain and minis on my friend Matts 60x90mm gaming board.

VC force with Hamlet in the back.

Next step in my ordering story...no minis for this weekend as I realy hoped for...

Your order went 1st Class Royal Mail
I assumed you lived in the UK for which we use Fed-Ex.

As for Sweeden we cannot use a courier service.
I've sent x 3 parcels (as we have a weight restriction of 2kg nper parcel)

All should be with you within 7-10 days.

Got this e-mail yesterday evening:

So sorry about this, we've had 90% of your order ready and were waiting on a re-mould.
All has been complete now and your order will be dispatched via Fed-Ex courier service tomorrow.

Here are a realy nice painted mini of the Swedish statesman Birger Jarl in full armour during the 2nd Swedish crusade to Balticum in 1249. The mini are painted by Matte a member of our club forum. I realy looking forward to se more of he´s work. 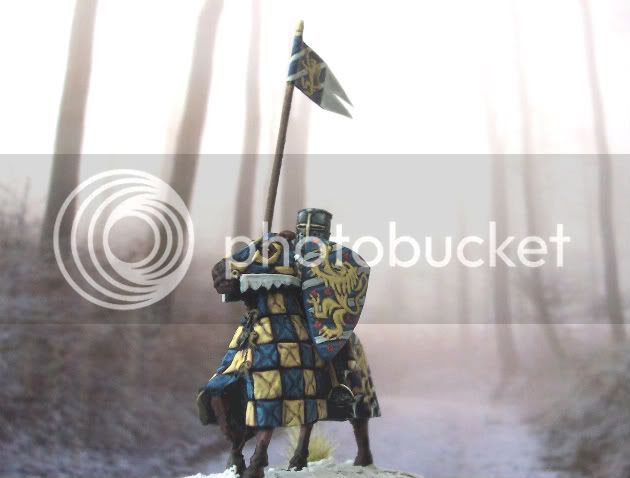 I still haven´t got my TYW minis order... more than 2 weeks since they charged my credit card...I tought that it would be dispatched on the very same day...BUT NO...after some inquirys and a 100hrs wait I got a e-mail there they informed me that they Still haven´t sent my order...but they will in 48hrs...!"darknes"...

Don´t they understand that I you start up a new project you want to get on with it...at least I think they could have the kindness to inform about the delay...

I found this very nice picture at a TYW blog called Clash of Empires ther was some realy nice pictures of TYW regiments.

My friend Stewe have started a new painting blog "Painted Miniatures", he is one of the members in our TYW club project. 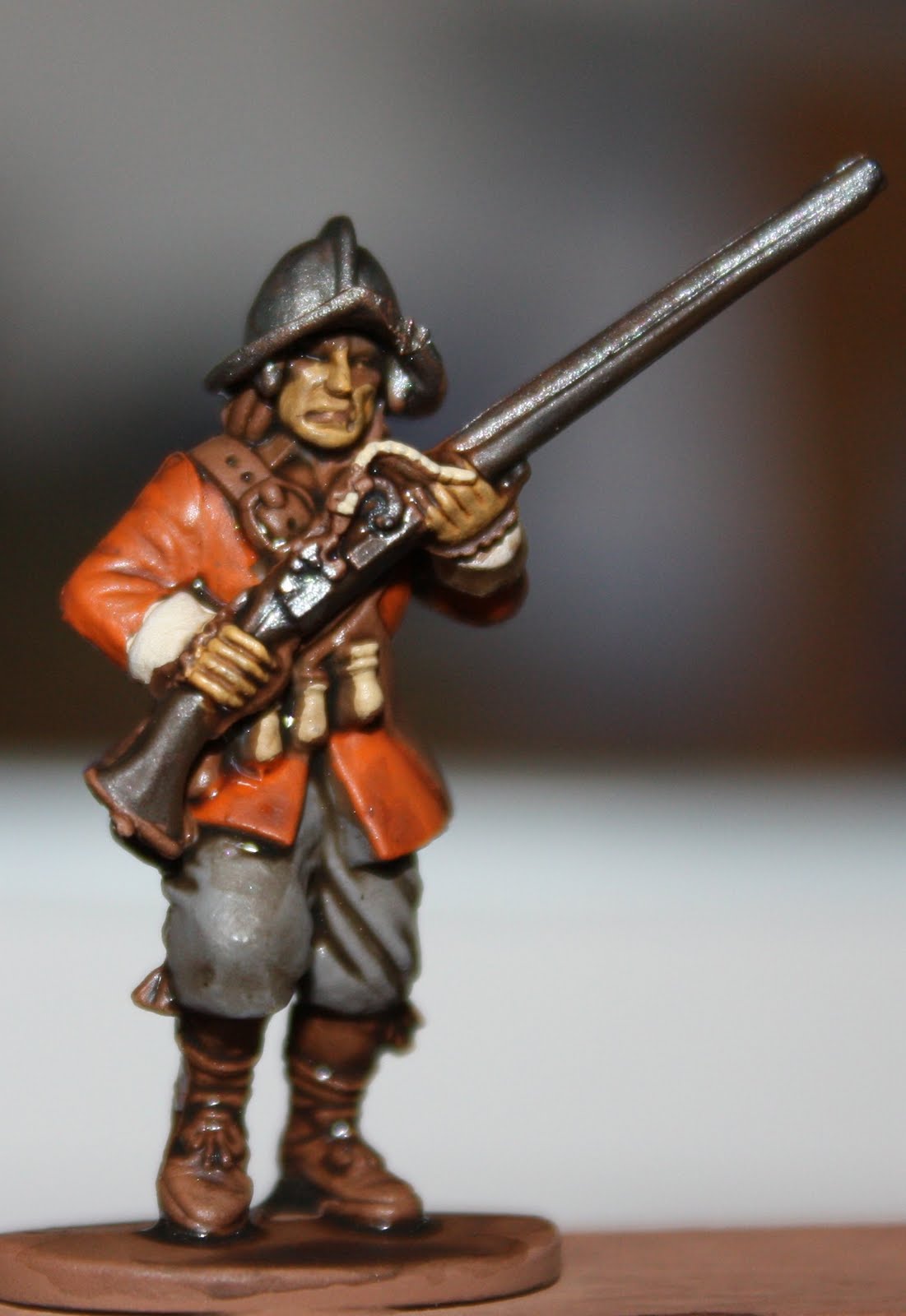 I still have not got my order of minis for my Spanish TYW army...But I have seen the army list for FoGR...and I was disappointed that they would not be allowed to have Old style Tercios???

And here some VIP pictures of my friend Oskars 2:nd army for TYW , The Polish army... some bases to be made but all minis are painted and the Linnen flags are in place and it looks realy nice:)

After my friend Oskar had convinced me that I "Realy" needed a 28mm TYW army, and he had already taken the Swedes...so I decided to make me a Catholic Spanish army....that beat the Swedes at Nördlingen 1634:)

We had a painting session down at our club during this weekend, I was only there for 4 hours but I managed to finish a Regiment of Cuirrasiers and my C-in-C Cardinal-Infante Ferdinan. I alsoe started to painting all the 20 Linnen flags that I will need for my army...I realy hope that my order of minis will arrive this week...
Here are some VIP pictures.

I got my copy of Extra Impetus 3 yesterday. Looks realy good and lots of new army list with focus on 15th century Europe.

Of course I was specialy interested in the Kalmar Union and the Swedish lists, looked fine to me, but I had ofcourse some question marks...like the Inclusion of T-Handgunners...I have never read about any formed bodys of Handgunners fighting in Sweden during this period 1434-1472...I hope I will find some answers...

+++ for the Kalmar Union and the Swedish flags that was included, only the Danish national flag missing... so I give you mine at the end of this post:)

Over all I was pleased with Extra Impetius 3!

And here are some Flags that I made for my 15mm Danish/Kalmar Union FoG army, 1490. and you can find some that looks very much like mine in the book...?

I Have now placed some orders for 28mm minis for my Spanish TYW army, to start with it will be 3 Tercio Viejos of 56 minis each (24 pik and 32 aquebus) and some Cavalry units... 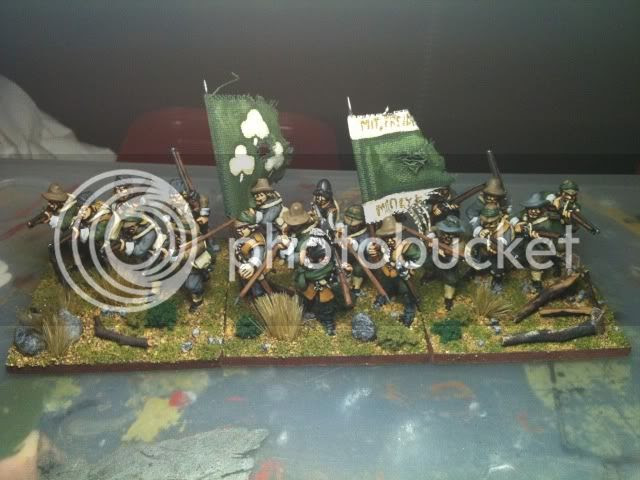 I have had several questions about our "Big-Bases" concept that I and my friend use them we play Impetus using 28mm minis and the measurement rules for 15mm minis. So here are the "Official" text that originaly was written by my friend Rickard for DBA about 5? years ago...

Gaming with 28mm figures is great. At our club we use 28mm figures based together on a single base for example DBA, Warmaster ancient games and latley Impetus.

The advantage of basing multiple figures on a single base is that the dead space that normally appears between single-based figures can be exploited. Basing figures on a larger single base allows the arrangement of more vivid fighting formations. Scenery and other battlefield scrap can added to make the base into a mini diorama. These larger bases can of course, with complementing single-based figures, be used as a core for example larger Warhammer units. 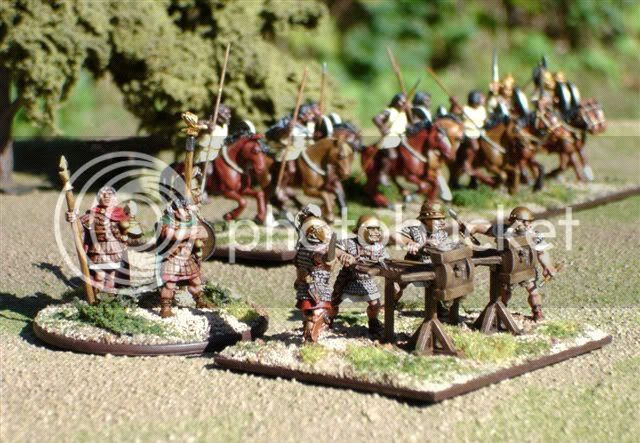 28mm figures are eight times more bulky than for example their smaller 15mm cousins and by their sheer mass give a good impression of an ongoing battle on the wargaming table. Details on individual figurer can for example easily be spotted more than “one meter away”. Also because of the size of the figures it’s easy to paint them to a reasonable war-gaming standard. It’s simply not that hard to paint details without staining adjacent areas.

The scale and the size of 28mm figures can in a sense reveal too much. For some gamers it just doesn’t feel right that four clearly visible figures holding a pointy stick could be said to represent a Macedonian phalanx. Another drawback is because this small “group of men” can be observed from a long distance, gamers end up painting detail after detail on each and every 28mm figure and in so doing loose the advantage of the ease of painting! The painting of a small project such as a 28mm DBA army usually ends up taking too long time for an average painter.

One very pleasant way of solving the problems is simply to bunch up more figures; for example letting four regular DB(x) elements in a square represent one unit. Single figures can hide among the mass of figures and don’t have to display their painting blemishes so openly. Maybe more importantly; suddenly the group of figures look and feels more like a real military unit.

Another factor we need to take into account is the size of today’s 28mm figures. Traditional DB(x) basing was designed for 25mm figures and today's 28mm are considerably larger. It’s simply hard to squeeze in four foot figures on the standard DB(x) size of elements. One way to get around this problem is to base figures in zigzag pattern. But to do so you need extra base depth. It is even harder to array the now popular figures in advancing stances in proper way. 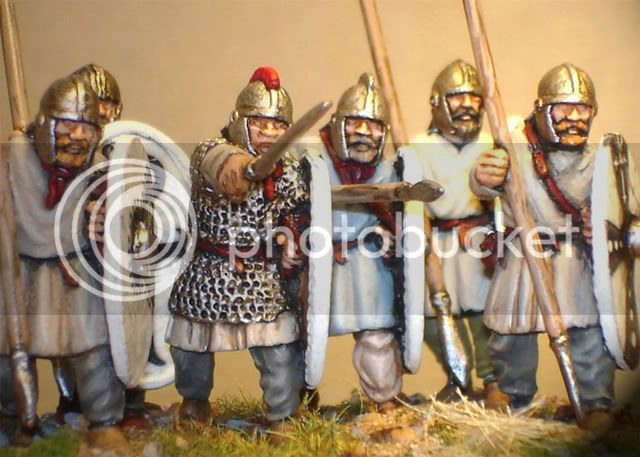 Hard to fit 28mm advancing troops, shields and all, on a base size designedfor 25mm

One way to create a nice looking element is to use a single base that is larger than the basic DB(x) element but smaller than the “four base unit”. This bigger base should be able accommodate a reasonable painting effort with a good visual impact. We need too find a balance between the two aspects. One good way to enhance the visual aspect is to add a second row of figures. 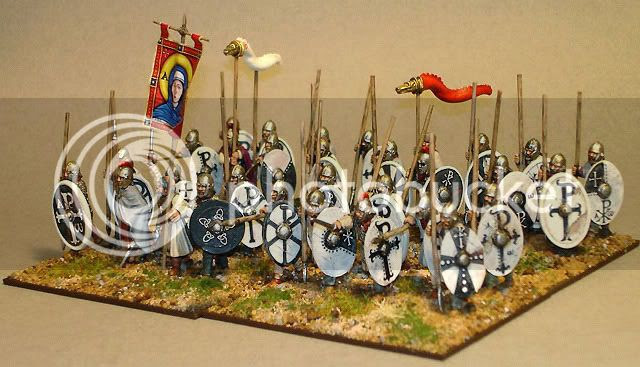 At our club we have experimented with different sizes for these big base elements. We have found that the width 80mm works well i.e. using 20mm frontage per heavy foot in close order as a guideline. The depth has varied (and still does among different players) but we do not think this is a problem as long as the whole army follows the same principle.

It’s mainly the depth of cavalry bases that has changed since we started using this method. The key to get the right look is the second row of figures so to achieve this cavalry bases have gone from 60mm depth up to 80mm depending on how chunky the figures are. 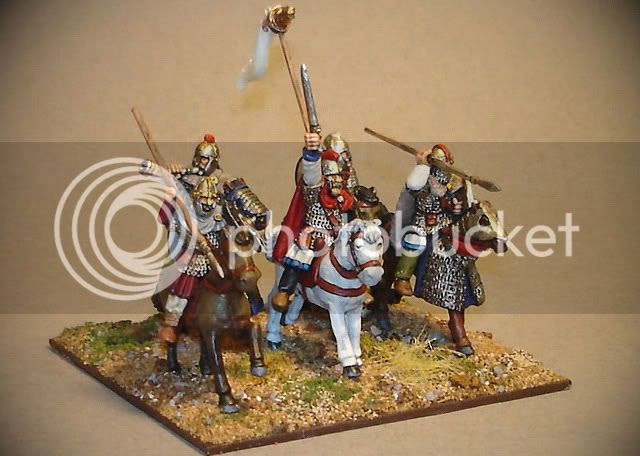 A cavalry model usually takes about 2.5cm frontage not counting waving arms, flapping barding and so on. In this case the figures are based in a stretched out zigzag pattern to give the impression of two rows.

Among our gamers, the actual number of figures per base is not “written in stone”. Much more important is that the unit looks good and appears to represent a certain type of unit. The large scale of the figures also helps; it is quite easy to see, even from a distance, if a stand represents skirmishing slingers or a pike unit.

Guidelines that we use are that an opponent should be able to easily distinguish between different types of units. The figures themselves and their type of formation on a base are most important factors for this. When basing it helps to think of the fighting formations in generic terms; such as heavy foot in close order, light foot in open order, skirmishers and so on.

A unit in your army unit should of course be made up from typical figures. This together with the figure's stance, amount of armour in the unit and the shield decorations can also be used to separate for example household troops from armed farmers. In that context the actual size of the base and a number of figures is less important. 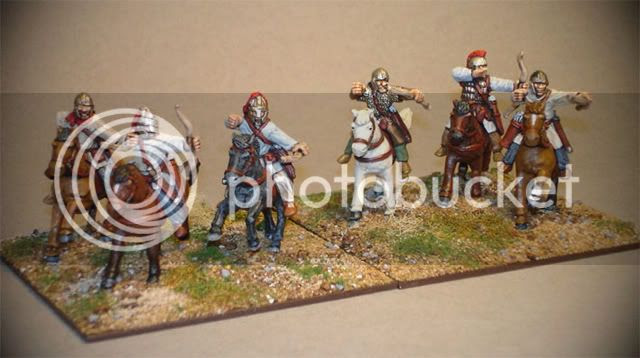 Eight figures of heavy foot in close order. The figures have been based in azigzag pattern. May be they are charging barbarians with vivid stances, or bows firing ahead. The same pattern can also be used for spear armed figures where the second row is pointing their weapon forward. With the extra depth of the big bases there is no problem to base figures in thie way.

Frontage: All bases have a frontage of 80mm.

All foot except Horde

Larger mounted elements such as 6Kn

Horde and larger foot elements as for example 8Bw