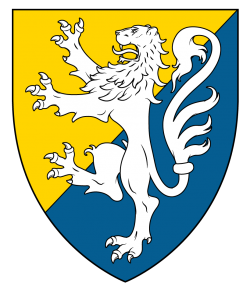 For our Medieval Swedish club campaign Håtunaleken with the Lion Rampant rules I have choose to run the House of Ulvåsa and their main caracter by the time the Knight, Chief Judge and Royal council member Gudmar Magnusson.

Gudmar Magnusson was maried to Margareta Ulfsdotter whoms father was a relative to the late King Magnus Birgersson. So when they was married Gudmar decided to change his CoA from a Deer Head (House of Boberg) to the Rampant Lion to show off his close connection to the Royal House of Bjälbo.

Of course the first minis to paint for my Lion Rampant Host had to be Herr Gudmar. I have built him straight from the Fire Forge Teutonic Knight box. So here a buch of pictures of our campaigns true hero;)