Back in 2010 I got a questions from Bishop Lord , that was planing a 10mm Medieval Scandinavian army, about some reference information. The question got me thinking of a Baltic Crusades project of my own...but I newer got around untill now...I hope;)

My first thoughts was to mak a 15mm Early Medeval Swedish army, using all my vikings, focus around the Swedish crusade to Balticum in 1240 and the Battle at Neva...

BUT 15mm are not my main scale at the moment...so I have decided to go with 28mm.

The Battle at Neva was fought between the Swedish Crusading force (including Bishop Thomas of Finland) under command of Birger Jarl (might have been Birger Jarl? At least in my version) and The Russians under command of the Novgorod Prince Alexander Yaroslavich (to become Alexander Nevsky after this victory.) Read more here.

The Swedish force I will start to make will be composed of some Noblemen and their Hird (the only pro soldiers in the army), they was probably mounted i.e knights, I plan to mix some armoured knights with a lot of less armoured followers, Probably not more than 2 units, like 1 for Birger Jarl and one for the Bishop Thomas.

The Infantry by the time was the Swedish Ledunge, freemen that was oblige to serve for the King/Jarl a set number of days each year. They will have quite outdate equipment (round shield was still often used) mixed with the latest, and led by some dismounted noblemen… So I will use a mix of vikings, normans and other back dated minis as well as some more up to date minis with iron hatts and some dismounted knights as commanders. I also plan to mix in one or two bow/x-bow men in the back of the units.

Lastly I will make some skirmish units…one with Bow and one with X-Bow or a mix…most of the missile armed men fought in the back of the Shieldwall, so just a few skirmishers for the Swedes.

There are not many books in English about Sweden in this period but Ospery have 2 that can give some more info if you are intereste in the period.

Both books have the Swedish David Lindholm as authour he are a MA of University of Lund in Sweden where he studied medieval archaeology, history and ethnology. He is also a specialist of medieval weaponry and warfare, and I think he have made a good work with these books. 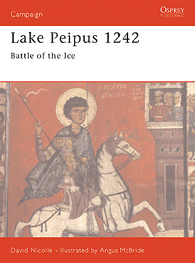 And here are a short inspiration...a film clip from a russian movie about the Battle at Neva 1240: